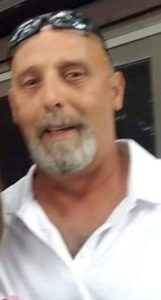 Mr. Joseph Carmen Mangelli, 62 passed away on Wednesday, April 1, 2020 at his residence.

Mr. Mangelli was born on February 14, 1958 in Beaver, to the late Frank and Helen (Battaglia) Mangelli. He enlisted into the U.S. Army on October 28, 1976 and served on Headquarter 5 of  Fort Dix in New Jersey, until his discharger on November 2, 1977.  Mr. Mangelli worked for Theo’s Painting, and was a member of The Beaver Valley Christian Fellowship. He was an avid drag-racing fan, who enjoyed nature, camping, and most of all, spending time with his beloved grandchildren. Mr. Mangelli had the best personality, always a joy to be around with an infectious laugh. He will be remembered for his heart of gold and readiness to help anyone.

He is survived by his daughters, Nichole (Michael) DiBattista of Ellwood City, and Coty Cole of New Galilee, his sons, Joseph Mangelli Jr., and Christopher (Megan) Mangelli both of Koppel, his brothers, Richard (Maria) Mangelli of New Castle, and Frank (Debbie) Mangelli of Chippewa Twp., and his grandchildren, Gianni and Michael DiBattista, Christopher Mangelli, and Carmen Cordes.

He was preceded in death by his parents, and his wife, Tamara Barnes who passed away in December of 2019.

Due to the current COVID-19 pandemic, a celebration of Mr. Mangelli’s life will be held at a later date.

The funeral arrangements are entrusted to The Samuel Teolis Funeral Home and Crematory Inc..