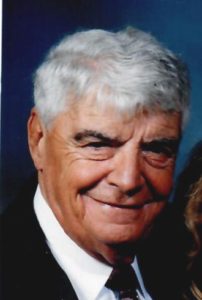 Mr. Joseph E Scala, 92, passed away peacefully on Saturday, August 1, 2020 with his family at his side. Born on November 29 1927 in  Wampum, Pa to the late Nick and Amanda “Mundy” (Fontana) Scala. He graduated from Wampum High School and attended Geneva College. He served as a Weather Observer for the US Air Force ( Army Air Corp). He was a past chairman of the Beaver County Tourist Promotion Association , served as Vice President of the Wampum Boro Council, and past President of the Wampum Rotary Club. Joe had a long and distinguished career with the American Automobile Club where he eventually served as President of the Beaver-Lawrence County AAA . He also served as Chairman of the PA AAA Federation and President of AAA smaller clubs. He was preceded in death by his parents and his wife Margaret ( Maggie) Scala.

Joe was an avid Pittsburgh Steelers and Pirates fan. Using his quick wit he gave as well as he took and always had a one II in the holster  waiting for the unexpecting victim. He enoyed weekly trips to the OTB and our annual Myrtle Beach golf trips with close friends and family. He also loved his time spent at the family camp in Franklin, PA sharing hours in the boat fishing and telling stories. He has left his friends and family with cherished memories that will always bring a smile to those who share them. Special thanks to all at Clenn-Moore Nursing Home in New Castle, Pa who treated him as family and looked after him so well and also to his  “adopted son” Louis Pomerico who helped so much in caring for Joe.