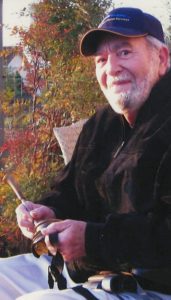 Tata was born on December 8th, 1932 in New Castle, to the late Luigi and Virginia (Rossano) Nocera Sr.. He graduated from New Castle High School and from the New Castle Business College.  Tata joined the U.S. Army during the Korean Conflict in 1950, while serving at Fort Benning in Georgia he attended the Army School of Mechanics and became a driving instructor for other soldiers. He was discharged in 1952 with the rank of Private First Class, and received an Army Occupation Medal for his service. Tata worked at the Babcock and Wilcox Company for 30 years as an inspector until his retirement in 1986. He continued to work as inspector for Unetrl Scope and Koppel Steel for many years. Tata also worked at Walmart Automotive in Cranberry Township and Chippewa as a customer service representative and lastly, at Koppel Auto as a handyman. He was member of the IMBS club in Koppel and the Koppel & Big Beaver Sportsmen’s Club. Tata was an outdoorsman to say the least, hunting and fishing the game lands of Pymatuning with his son and grandsons was one of his favorite past times. He enjoyed going on trips to the casino with his sister and brother-in-law, Rita and Fred Mazzanti, and spending time with his grandchildren and great-grandchildren. He will be deeply missed.

He was preceded in death by his parents, his wife, Doris Marie (Strabryla) Nocera “Baba” whom he married on February 17th 1955 and passed away on November 12th, 2007, his daughter, Donna Nocera-Miller in 2005, his brothers, Julius and Anthony Nocera, and his sisters, Mary Vellone, Isabell Alberico, Molly Mazzant, and Rita Mazzanti.

Visitation will be on Tuesday, November 23rd, 2021 from 3 until the time of funeral service at 7 pm at the Samuel Teolis Funeral Home and Crematory Inc.. A private inurnment will be at Locust Grove Cemetery.

Memorial Contributions in Tata’s name may be made out to St. Jude’s Children’s Hospital at https://www.stjude.org/donate/pm.html?sc_dcm=58700006942402314&sc_cid=kwp&sc_cat=b&ds_rl=1285465&gclid=Cj0KCQiA-eeMBhCpARIsAAZfxZAax5mxszgI5llkjJy-4mzIPCMKSXQPKL7AZ9l1cFOMFSMr-5-7WjYaAvRSEALw_wcB&gclsrc=aw.ds