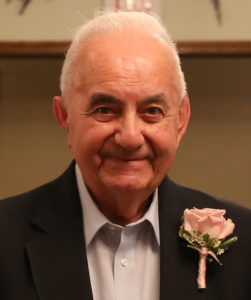 Born August 17th, 1928 in Ellwood City, PA, he was the son of the late George and Victoria Siovaila and husband of the late Lois (Schalois) Siovaila. They were married for 68 years. In October of 1946, when Paul was 17 years old, he enlisted in the U.S. Navy, serving as a Fireman 2nd Class on the USS Franklin D. Roosevelt Aircraft Carrier until 1948. Paul then joined the U.S. Army in 1949, and with the rank of Corporal (CPL), he served as part of the 10th Motorcycle Squad with the military police in Korea until his discharge in 1952. He had guarded Douglas MacArthur and quoted him saying, “Old soldiers never die… they just fade away.” He was honorably discharged by both branches of the military, receiving high honors for his service-the Occupation Medal (Japan) and the Korean Service Medal with 5 bronze stars.

Paul worked at the National Tube Plant in Ellwood City as a tool inspector for 32 years.  He then worked for the U.S. Postal Service until his retirement in 1989, and received a grateful appreciation award for his dedicated service during an honorable career of 20 years. He was a lifetime member of the Ellwood City Moose Lodge #93 and a former constable for the Ellwood City Borough. Paul was an avid gardener and an outdoorsman, who loved to hunt and fish at the Pymatuning Reservoir and Slippery Rock Creek, as well as enjoying time with his wife, Lois at Cook Forest State Park.

In addition to his parents and his wife, he was preceded to heaven by his son, Timothy James Siovaila, his brother, Emil Eugene Siovaila, and his great granddaughter, Malakhi James Siovaila.

Public visitation will be held on Monday, July 19th from 12:30 PM until the time of service at 1:30 PM at the Samuel Teolis Funeral Home and Crematory, Inc. with Tami (Siovaila) Stevens officiating. Interment will follow at the Pleasant Hills Cemetery, where full military honors will take place.