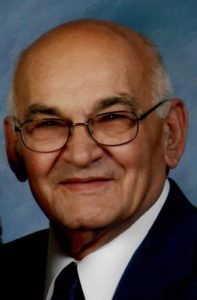 Mr. Peter J. Agostinelli, 93, of Franklin Twp., passed away on Friday, October 9, 2020 at the UPMC Passavant Hospital in McCandless Twp..

Mr. Agostinelli was born on December 25, 1926 in Ellwood City, to the late Peter and Esther (Dinello) Agostinelli. He graduated from Lincoln High School with the class of 1944, and enlisted into the U.S. Army.  Mr. Agostinelli worked for the National Tube Mill as a boiler-maker and later at Strohecker’s in Enon Valley, where he did welding design. He is a member of the Union Goodwill Community Church in Franklin Twp. Mr. Agostinelli was known for his love of cooking, and especially baking. He was a family man, who loved spending time with his grandchildren and great-grandchildren. He also enjoyed brick laying and working with cement block, helping to construct homes for his family members along side his uncle Tony.

He is survived by his wife, Mildred (Burke) Agostinelli, whom he married on July 2, 1946, his daughter, Nancy (Michael) Gilliland of Portersville, his son, Robert (Marcie) Agostinelli of Ellwood City, his grandchildren, Michael (Erin) Hart, Steven (Julie) Hart, and Ryan (Angela) Hart, his great-grandchildren, Benjamin, Chloe, Logan, Peyton, and Mia Hart, and his brother John (Martha) Agostinelli of Tennessee.

He was preceded in death by his brothers, Alfred and Richard Agostinelli.

A memorial service will take place at a later date. Arrangements have been entrusted to The Samuel Teolis Funeral Home and Crematory Inc..

Memorial Contributions in Mr. Agostinelli’s name may be made to the Union Goodwill Community Church located at, 950 East Street, Ellport, PA 16117.