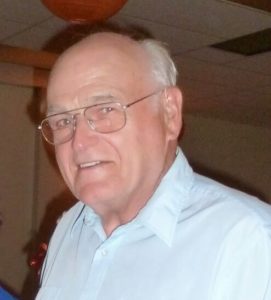 Mr. Ronald Norgrave Aiken, 85 of Wayne Township went to be with his savior on Thursday, July 29, 2021 at the Butler Memorial Hospital.

Ronnie was born in Ellwood City on May 10th, 1936 to the late Harry W. and Adda Mae (Shaffer) Aiken, Ronnie was next to the youngest of 12 siblings. He graduated from Lincoln High School with the class of 1954, and is were he met the love of his life, Anna Marie Bartolomeo. They married on June 25, 1955 and have enjoyed a beautiful marriage of 66 years together. Ronnie was a kind, gentle, and generous man to Anna, and all who knew him. He enjoyed remodeling his home for his love, hunting, fishing, and playing the guitar. He was a lifetime member of the Ellwood-Wampum Rod and Gun Club, and had served on the Wayne Twp. Zoning Board.

Ronnie retired from the Babcock and Wilcox Steel Mill where he was an inspection foreman. He also was one of the founders of Aiken Refuse along with his son Mark. He spent his retirement years traveling, caring for his home, and helping his family in any way he was able. He was and will always be a cherished father, pap, brother, and uncle.

He is survived by his wife Anna, children, Renee (Leonard) Borselli of Monterey, TN, Mark (Beth) Aiken of Shenango Twp., Roniann “Buffy” Menosky of Ellwood City, and Amy (Matt) Shope of Chippewa Twp.. He truly loved his grandchildren, Jesse, Erica, and Jeffrey Borselli, Matt and Chelsea Aiken, Lindsey and Brian Woroszylo, Jake and Molly Menosky, Olivia, Luke, Alaina, Lilly, and Lincoln Shope, as well as his great-grandchildren, Robert Schuster, Marshall and Zoey Aiken, and Quinn Woroszylo, He is also survived by his sister, Carol (Dr. Donald) Wygal, and  was adored by all his many nieces and nephews.

Visitation will be held on Sunday from 4-7 pm and on Monday from 11:00 am until the time of the service at Noon with Rev. R. Tod Custer officiating at the Samuel Teolis Funeral Home and Crematory Inc.. Interment will follow at the Holy Redeemer Cemetery.

Memorial contribution’s in Mr. Aiken’s name may be made to the donors charity of choice.