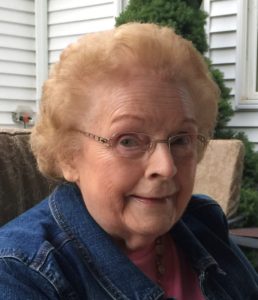 Mrs. Ruth Genevieve (Hampton) Holleran passed away peacefully in her home in Avon Lake, Ohio on Wednesday July 13, 2022. She was the youngest of 13 children born to the late William Bernard and Anna Cecilia (Haney) Hampton on September 23, 1927.

She grew up in Ellwood City, Pennsylvania and had fond memories of her hometown and large family. It was there that she met the love of her life John (“Jack”) Holleran at a spaghetti dinner at St. Agatha’s Church Hall.  Ruth and Jack were married at St. Agatha’s in 1950 and lived in Ellwood where their first of four children were born.  They moved to Munster, Indiana when Jack took a job at Republic Steel. Later, they moved to St. John Township, Indiana then Westlake, Ohio and, after Jack passed away, Ruth moved to Avon Lake, Ohio.

Ruth was a fabulous wife to Jack whom she loved so deeply, and an amazing mother and true friend to her four children.  She always had a song in her heart and usually could be heard singing while working about the house. She would often sing with Jack as he played the family piano and Jack often marveled at Ruth’s natural ability to harmonize so beautifully.

Ruth had an adventuresome spirit, a dreamer’s imagination and loved family vacations, cookouts in the parks and making up bedtime stories for her children, grand children and great grandchildren.

Ruth was devoted to her Catholic faith and would gather the family to pray the Rosary regularly before the Sacred Heart of Jesus.  Later in life, Ruth added special daily devotions to the St. Jude Novena, the Divine Mercy Chaplet, and the Miraculous Medal and,  as she had done all her life, prayed the Rosary daily.

Visitation will be held on Wednesday, July 20th, from 10:00 am until the time of the Mass of Christian burial at 11:00 am at the Holy Redeemer Church with Father John Wehner officiating. Ruth will be interred near her beloved mother and father and beside her lifelong love Jack in Holy Redeemer Cemetery in Ellwood City. Arrangements have been made through the Samuel Teolis Funeral Home and Crematory Inc. in Ellwood City.