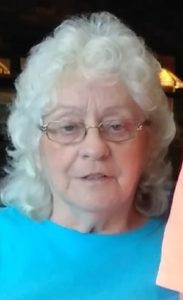 Mrs. Naomi C. Howell, 80, of Baden passed away on Monday, September 16, 2019 at the Good Samaritan Hospice in Beaver.

Mrs. Howell was born on June 28, 1939 in Ivydale, West Virginia to the Late Holly R. and Lora (Cart) Lowers. She had worked for the James Madison University in the house keeping department.

She is survived by her daughter, Donna Harbein on Harrisonburg, VA, her son, David Howell of Baden, her step daughters, Millie Rae Eaton and Terry Lynn Creese, her step son, Herbert Howell of Ellwood City, her grandchildren, Shakira Simmers, Skylar Harmon, and Maxwell Howell, three step grandchildren, and four step-great-grandchildren. She is also survived by her sister, B.K. Stewart of Virginia, and her brothers, Grover (Gloria) Lowers of Ellwood City and Owen (Sandy) Lowers of Fombell.

She was preceded in death by her parents, her husband, Ray Howell whom she married in 1982 and passed away in 1998, her sisters, Lenora Shaner, Wilma Holcomb, Velma Long, Betty Cutlip, Verma Cowhick, and Thelma Butch, and her brothers, Roscoe Lowers and Gordon Lowers.

Visitation will be held on Tuesday from 6-8 pm  and on Wednesday from 10:00 am until the time of the service at 11:0o am at the Samuel Teolis Funeral Home and Crematory Inc. with Rev. Tony Cortez officiating. Interment will follow at the Locust Grove Cemetery.