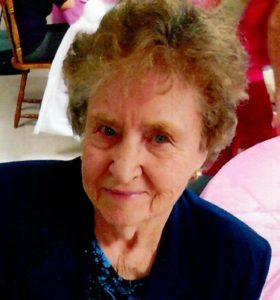 Mrs. Mazzant was born on November 23, 1930 in Ashtabula, Ohio to the late Sheridan Wilcox. She had worked at the Tomcik Bakery in Beaver Falls as a professional cake decorator, and later at Little Fellas in Ellport as a seamstress. She is a member of the Holy Redeemer Parish. Nellie enjoyed cooking, sewing, reading, gardening, and most of all spending time with her children, grandchildren, and great grandchildren.

She was preceded in death by her parents, her husband of 50 years, Anthony B. Mazzant whom she married on July 28, 1947 and passed away on July 8, 1997, and several brothers and sisters.

Visitation will be held on Wednesday from 2-4 pm and 6pm until the time of the Blessing Service at 8pm at the Samuel Teolis Funeral Home and Crematory Inc.. Interment will be at the Holy Redeemer Cemetery.