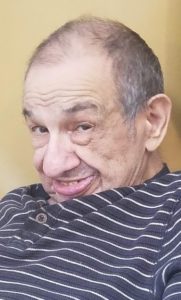 Mr. Nick Ierino, Jr, 83, of New Castle passed away on Wednesday, March 18, 2020 at The Grove at New Wilmington where he has resided for the past ten years.

He is survived by his sister-in-law, Mary Grace Ierino of Ellwood City, and several nieces and nephews.

He was preceded in death by his parents, his sisters, Louise Badger, Rose Marie Cross, and Virginia Herko, his brothers, Domenick, Joseph, Samuel, and Frank Ierino, and his brothers-in-law, Donald Badger and Carl Herko.

A private burial service will be held at the Locust Grove Cemetery in Ellwood City. The funeral arrangements are entrusted to the Samuel Teolis Funeral Home and Crematory Inc.

Online condolences may be sent via Teolisfuneralhome.com.