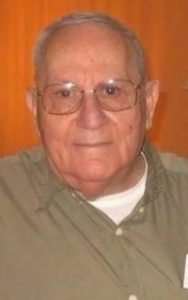 Mr. Nick Patsy Rocco, 88, of Ellwood City passed away on Sunday, June 14, 2020 at the Beaver Valley Health and Rehabilitation Center.

Mr. Rocco was born on July 13, 1931 in Ellwood City to the late Samuel and Elizabeth (Arena) Rocco. He had graduated from Lincoln High School with the class of 1949, and is a member of the Holy Redeemer Parish. Nick enlisted with the U.S. Army on October 9, 1952 and served with the 160th Field Artillery Battalion during the Korean War until his discharge on August 19, 1954. He was awarded the Korean Service Medal with 2 Bronze Service Stars, National Defense Service Medal, Good Conduct Medal and the United Nations Service Medal.  Following his service with the Army, Nick worked at National Plumbing, Ellcast Foundary, Universal Rundle, and Morabito Contracting. He was also a member of the Sons of Italy Lodge #608 and the MOOSE #93.

He is survived by his sisters, Rose Venditti, Edith Pacella, Elvira Masters, and Martha Boschini, his brother, Anthony (Josephine) Rocco, his sister-in-law, Emma Rocco, and several nieces and nephews.

He was preceded in death by his parents, his sisters, Theresa DeLoia and Genevieve Grant, and his brothers, Carlo Rocco and Valentino Rocco.

A private family visitation and Blessing Service will be held on Thursday at the Samuel Teolis Funeral Home and Crematory Inc. with Father Mark Thomas officiating. Interment will be at the Holy Redeemer Cemetery.