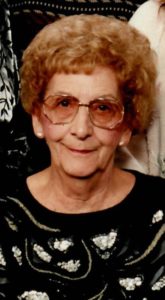 Norma J. Frampton, 89, of West Pittsburg passed away on Wednesday, April 22, 2020 at the UPMC Jameson Hospital.

Norma was born on October 25, 1930 in Ellport to the late Harry and Thelma (Curtis) Lucas. She had attended Lincoln High School and the First Church of God. She had worked at Dust Proof and at the Ellwood City MOOSE Lodge #93. She was a great bowler. She won many awards and trophy’s for her bowling. In 1975, she was honored by the Ellwood City Athletic Association for her bowling.

She was preceded in death by her parents, her sister, Shirly Bushyeager, and her brother, Gene Lucas.

Due to the COVID-19 pandemic, a private service will be held for her family at the Samuel Teolis Funeral Home and Crematory Inc. with Rev. Phil  Conklin officiating. Interment will be at the Locust Grove Cemetery.

Memorial contributions in Mrs. Frampton’s name may be made to the Alzheimer’s Association.