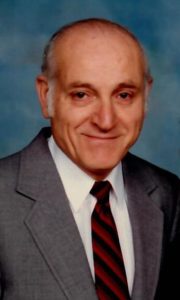 Mr. Marinaccio was born in Ellwood City on Easter Sunday, April 4, 1926 to the late Dominic “Luigi” and Angela Rosa Marinaccio. Pat was a member of the Holy Redeemer Parish in Ellwood City.

Pat enlisted with the U.S. Army Air Corp on December 27, 1943. After basic training he was switched to the U.S. Army Infantry, and had to go through a second basic training. He saw active duty in Germany with the 104th Infantry division. He was with the U.S. troops that famously met the Soviet troops on the Elbe River bridge, cutting the German army in two. He was also present at the liberation of the Nordhausen concentration camp. He fought in the battles of the Rhineland and Central Europe, and was awarded the Army of Occupation Germany European African Middle Eastern Service Medal, American Theater Service Medal, Good Conduct Medal, and the Victory Medal. After the war, he received a drafting degree at Penn College in Williamsport, Pa.

Pat worked as a draftsman for Westinghouse Corporation in Sharon, Pa, and for most of his career, as a draftsman leader at the Babcock & Wilcox Steel Mill in Beaver Falls for over 30 years. After his retirement, he worked part time for the Herr Voss Corporation in Zelienople, Pa.. Pat taught organ (keyboard) at the Ellwood City Art Club for many years, and was a past president of the club. He was one of the original committee members of The Ellwood City Arts, Crafts, and Food Festival, for over 20 years, he headed the juried art show and provided AutoCad drawings of the park grounds and the vendor tents layout.

In addition to his parents, Pat was preceded in death by his wife of 64 years, Irene (Raffetto) Marinaccio on April 30, 2014, his brothers, Lawrence and Orlando Marinaccio, and his sister, Philomena Chiappetta.

Visitation will be held on Tuesday from 2-4 and 6-8 pm at the Samuel Teolis Funeral Home Inc and Cremation Services. A mass of Christian burial will be held on Wednesday at 10:00 am at the Holy Redeemer Church with Father John Gallagher officiating. Entombment will follow at the Holy Redeemer Cemetery, St. Peter’s Mausoleum. Members of the Veterans Honor Guard are asked to meet at the church on Wednesday by 10:45 am to conduct full military honors.

Memorial contributions in Mr. Marinaccio’s name may be made to the Holy Redeemer Angel Fund.