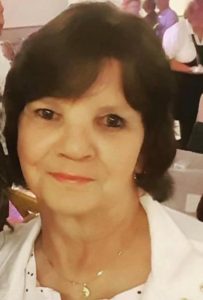 Patricia was born in Guthrie, OK on March 6th, 1946 to the late Fred J. and Ruby E. (Yohe) Couts. She had worked as a waitress at the former Demas Restaurant in Ellwood City and at Christy’s Restaurant in Franklin Twp. for over 30 years. Patty was a passionate Elvis Presley fan.

She was preceded in death by her parents, granddaughter, Joie Lyn Lordi, sister, Winnie G. Catron, and brothers, Fred “Butch” Couts and George Couts. Visitation will be held on Tuesday from 2-6 pm at the Samuel Teolis Funeral Home and Crematory Inc..

Memorial contributions in Patty’s name may be made to the Pennsylvania Coalition Against Domestic Violence: PCADV.