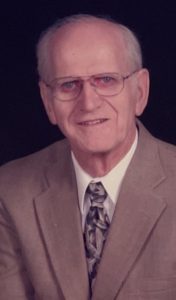 Paul was born in Jennerstown, PA on June 29th, 1927 to the late Joseph and Anna Hrabosky Plavecsky. He attended Lincoln High School until he left to serve in the U.S. Army Signal Corps during World War II where he decrypted enemy messages from 1945 until 1946. He was awarded the World War II Victory Medal for his service. When the war ended, he returned home to complete his GED.

He was a Class A specialty machinist employed at US Steel for 30 years until it’s closing in 1975. He was also a machinist at Commercial Machine Works for 13 Years where he traveled around the country to do intricate repairs at power plants and other industrial facilities. He also worked at Hall Industries for 16 years which is in the US Steel Industrial Park in Ellwood City. He also worked for many years as a plumber and loved doing home repairs and handyman work for friends and family. He could fix anything. If he couldn’t fix it, it wasn’t broke.  Paul also enjoyed watching all sports and was an avid Pittsburgh Pirates, Steelers & Penguin fan.

Paul was preceded in death by his loving wife Julie (Ottobre) with whom he was married to for 69 years. He was the last of six brothers and two sisters who preceded him in death: John Plavecski, Joseph Plaveczki, Bill Parks, Mike Plaveczki, Steve Plaveczki, and Louis Plavecsky, and two sisters Ann Bennett and Margaret Plaveczki.

A visitation will be held at the Samuel Teolis Funeral Home & Crematory Inc. in Ellwood City on Monday from 2-4 and 6-8 pm.

A mass of Christian burial will be held on Tuesday at the Holy Redeemer Church, 415 4th Street, Ellwood, City, PA 16117, at 10:00 am. Entombment will be held immediately following the funeral service at Holy Redeemer Cemetery ,St. Peter’s Mausoleum, 2900 Brighton Road, Ellwood City, PA 16117. Members of the Veterans Honor Guard are asked to meet at the cemetery on Tuesday by 11:00 am to conduct full military honors.

The family would like to thank the nurses at AGH Home Hospice Care and Ladies of Charity for their support and specialty care during this difficult time.

Memorial contributions in Mr. Plavecsky’s name may be made to the Holy Redeemer Food Bank or to Challenges.