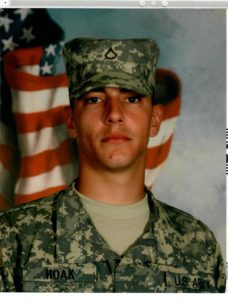 Phillip was born on August 26, 1986 in New Castle to Sherri Hoak and Kevin McCormack. He attended Riverside High School. Following high school Philip enlisted into the United States Army on August 23, 2011 and was discharged October 20, 2015. During his time in the Army, Phillip received the Army Commendation Medal, the Army Achievement Medal, the National Defense Service Medal, the Global War on Terrorism Service Medal, the Army Service Ribbon and the Overseas Service Ribbon. Phillip was currently working as a self-employed contractor, and was a member of The Lillyville Church of God. An outdoorsman, Phillip enjoyed golfing, hunting, fishing, and going to his family’s camp in Franklin.

He is survived by his parents, his son Hunter Hoak of Hershey, his maternal grandmother Shelby Hall of Franklin Twp., his uncle Darin Hoak of Perry Twp., and his girlfriend Joanie Koach.

He was preceded in death by his sister Megan Wilhelm, his maternal grandfather Wilbert Gary Hall, and his aunt Stacey Hoak.

Visitation will be held on Tuesday, June 23, from 2 pm until the time of service at 5pm at the Samuel Teolis Funeral Home and Crematory Inc., with Rev. Dennis Arndt officiating. Members of the Veterans Honor Guard are asked to meet at the funeral home on Tuesday, by 4:50 pm to conduct full military honors. Inurnment will be at the Lillyville Church of God Cemetery.