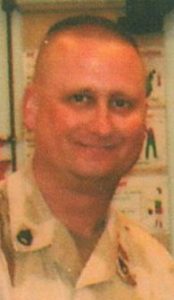 Ralph was born on January 26, 1964 in Ellwood City to the late James Stoyanoff and Octavia Conforti Stoyanoff of Ellport. He is a member of the Lincoln High School class of 1982 and the Holy Redeemer Parish. Ralph served with the U.S. Army from 1984 until his discharge in 2007 with the rank of Staff Sgt.. He served in Desert Storm, Korea, Germany and Iraq. He was awarded the Bronze Star, Army Accommodation Medal, Army Achievement Medal, Drivers Badge, and Expert Rifleman Badge. His assignments included the 60th ordnance in Friedberg, Germany, 465th TC in Franklin , Pa and Ft. Lee, Virginia, 58th TC at Fort Leonardwood, Missouri, 2nd Tank in the Republic of Korea, 298th TC in Bristol, Pa, the U.S. Air Assault Academy at Fort Campbell, KY, Recruiter School at Fort Eustis, VA, and the Pittsburgh, Recruiting Battalion in Pittsburgh. Ralph studied Phlebotomy at Towson College in Maryland, and had worked at the Butler VA Hospital as a phlebotomist while he was serving with the Army Reserve. He is a lifetime member of the American Legion in Monaca, and the V.F.W. Post 8106 in New Galilee. He had played and coached American Legion baseball for several years, and was an avid Pittsburgh sports fan. Ralph loved animals, but must of all enjoyed spending time with his grandchildren. He will be sadly missed by all.

He was preceded in death by his father, and his brother David Stoyanoff.

A Private Blessing Service will be held for Ralph at the Samuel Teolis Funeral Home, Inc. and Cremation Services with Father Camillus Njoku officiating. Military honors will conducted by the Veterans Honor Guard.

Memorial donations in Ralph’s name may be made to the Human Society, or to the Wounded Warriors Foundation.