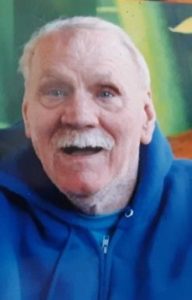 Mr. Bollinger was born in Slippery Rock on July 4th, 1944 to the late Carl M. and Marian R. (Clyde) Bollinger. Ray worked as a heavy equipment operator for various strip mining companies in the Ellwood City area. He enjoyed the outdoors and loved to laugh and have fun. His greatest joy was his family.

He was preceded in death by his parents, wife Esther (Lutz) Bollinger whom he married on February 11th, 1966 and passed away on October 8th, 2007, daughter, Bonnie Marie Zilka, brothers, Bob and his wife Mary Bollinger, and Carl Bollinger.

Visitation will be held on Tuesday from 3 pm until the time of the service at 5 pm at the Samuel Teolis Funeral Home and Crematory Inc. with Pastor Peggy Suhr-Barkley officiating. Interment will be at the Pinewood Memorial Park in Cranberry Twp..