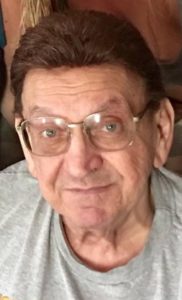 Mr. Pratt was born on November 18th, 1936 in Ellwood City to the late Joseph and Anna (Canavin) Pratt. He is a member of the Lincoln High School class of 1954 and the Holy Redeemer Parish. After high school, Ray enlisted with the U.S. Air Force on July 12th, 1954 and served until his discharge on January 11th, 1958. Following his service with the Air Force, Ray worked for the CIA and later as a self employed computer programmer. He enjoyed lifting weights up until his mid 70’s, and loved to travel especially with his grandchildren.

He was preceded in death by his parents and his wife, Roseline Landolfi Pratt whom he married on July 16th, 1966 and passed away on July 23rd, 2020.

Visitation will be held on Tuesday from 5-8 pm at the Samuel Teolis Funeral Home Inc.. A mass of Christian burial will be held on Wednesday at 10:00 am at the Holy Redeemer Church with Father Phil Farrell officiating. Inurnment will be at the Holy Redeemer Cemetery. Members of the Veterans Honor Guard are asked to meet at the church on Wednesday by 10:45 am to conduct full military rites.