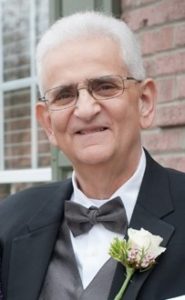 Richard W. Santillo, 78, of Seminole, FL, formerly of Ellwood City, passed away surrounded by his family on May 27, 2022 from complications of Alzheimer’s disease.  He was born in Ellwood City on February 23, 1944, the son of the late Michael and Christina (Maietta) Santillo.  He was married July 31, 1971, to Jane (Boering) Santillo, who survives.

He attended B.V.M. parochial school through eighth grade and graduated from Lincoln High School in 1961.  He earned a bachelor’s degree in secondary education from California University of Pennsylvania and later earned an M.Ed. degree and finally a superintendent’s certificate, both from Westminster College.

A passionate life-long educator, Rich began his career teaching biology at Shenango High School.  He then served as a guidance counselor in the Mt. Lebanon School District before returning to Ellwood City where he served as guidance counselor and then principal of Lincoln High School. He completed his service in the Ellwood schools as Director of Curriculum for the school district.  He became assistant superintendent of the North Hills School District, retiring from North Hills in 1999.  In his retirement, he taught in the graduate school of education at Westminster College.

Rich was an avid golfer, beginning his golfing years as a young boy caddying at the Connoquenessing Country Club.  He played golf as often as he could throughout his life and made lots of wonderful friends on the golf course.  A highlight of his golfing years was a hole in one on the course at New Castle Country Club in Neshannock. That ball is framed and hung on a wall wherever Rich lived from that day forward.

Rich was a devoted family man who loved his wife and daughters, his grandsons, and his entire extended family and was deeply loved in return.

As well as his parents, Rich was preceded in death by a sister-in-law, Barbara Santillo, and his in-laws, Josiah and Mary Jane Boering.

Visitation will be held on Sunday from 1-5 pm at the Samuel Teolis Funeral Home and Crematory Inc. A mass of Christian burial will be held on Monday at 10:00 am. at the Holy Redeemer Church with Father Mark Thomas officiating. Interment will follow at the Holy Redeemer Cemetery.  Those attending are asked to wear a mask and practice social distancing.

Memorial donations in Rich’s name may be made to the Ellwood City Public Library, 415 Lawrence Avenue, Ellwood City, PA 16117.