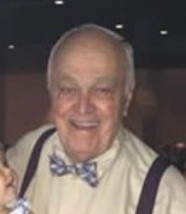 Mr. Robert B. Lucarelli, 81, of Ellwood City passed away on Tuesday, December 25, 2018 at the Butler Memorial Hospital.

Mr. Lucarelli was born on August 14, 1937 in Ellwood City to the late Lorenzo and Rafaelena (Ciramella) Lucarelli. Bob is a member of the Lincoln High School class of 1957. Following high school, he served with the U.S. Army for four years during the Korean War. Bob worked at John Manseille (BNZ Materials) in Zelienople for 37 years as a kiln operator. Following his retirement he worked as a driver at the Butler Auto Auction, and since 2007 helping his son at Nico Luciano’s Restaurant. He had belonged to the Ellwood City Lions and Kiwanis Clubs. From 1998 until 2010 Bob was the equipment manager for the Ellwood City High School Football team. He enjoyed fishing, hunting, and cooking. For many years he portrayed Santa Claus on Christmas Eve for various families in the Ellwood City area and at the McGuire Home. A devoted family man, he had an unconditional love for his wife and family.

He was preceded in death by his parents, his sister, Rose Moore, and his brother, John Lucarelli.

Visitation will be held on Thursday from 4-8 pm at the Samuel Teolis Funeral Home, Inc and Cremation Services. A mass of Christian burial will be held on Friday at 10:00 am at the Holy Redeemer Church with Father John Gallagher officiating. Interment will follow at the Holy Redeemer Cemetery. Members of the Veterans Honor Guard are asked to meet at the church on Friday by 10:45 am to conduct full military honors.

Memorial contributions in Bob’s name may be made to the UPMC Children’s Hospital of Pittsburgh.