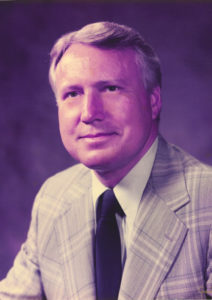 Robert Barensfeld, age 96, died peacefully of old age in his residence in Ellwood City, PA on August 2, 2021.  He was born on March 11, 1925 in Cleveland, Ohio to Etienne and Lenore Barensfeld.  He was predeceased in 2012 by his wife, Janice Evans Barensfeld.  He is survived by his children, Christine Barensfeld (John Hagerman) of Boxford, MA, and David Barensfeld (Wendy) of Ellwood City, five granddaughters and three great grandchildren. His son Robert died in 1982.

The fifth of six siblings—two girls and four boys— he survived all of them.  He grew up in modest circumstances in the Great Depression but his family was close knit.  His older siblings worked to support their mother and younger siblings after the premature death of Bob’s father when Bob was 12 years old.  He maintained throughout his life a cheerful optimism in the power of hard work and good planning.  He was a loving and fun father, grandfather and great-grandfather, and a great teacher inside and outside his family.

Bob was a graduate of Baldwin-Wallace College, Berea, OH.  He commenced work at Ellwood City Forge in 1950, rising to become its president in 1973.  He was an innovative manager who made pioneering investments in new machine tool and forging technology.  His success at Ellwood City Forge positioned the company for its later expansion following his retirement in 1983, including its construction of Ellwood Quality Steels in New Castle, PA in 1985.  He continued as chairman of the board of Ellwood Group, Inc. until 2019 and was chairman emeritus at his death.

In addition to his business career, Bob pursued a series of community activities.  Over the years these included the Boy Scouts, Riverside Beaver County school board, Ellwood City Hospital board, Marion Township planning commission, Heinz History Center and Ellwood City Area Historical Society, among others. He kept up a life-time hobby of wood-working and was an expert photographer and trout fisherman.  He was a great student of history, especially of the Civil War.

Bob’s family deeply appreciates the steadfast love and support provided to Bob by his home caregivers over the past several years.  The family suggests any gifts, in lieu of flowers, be made to the Ellwood City Area Historical Society, 310 Fifth Street, Ellwood City, PA 16117.  Friends and family are invited to a memorial gathering for Bob on September 2, 2021 from 5:30 to 7:30pm at Connoquenessing Country Club, 1512 Mercer Road, Ellwood City, PA 16117. The final arrangements are entrusted to the Samuel Teolis Funeral Home and Crematory Inc..