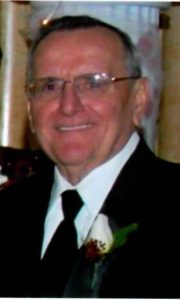 Mr. Robert “Bob” Eugene Foley, 87, of Ellwood City passed away peacefully at his residence on Wednesday, May 27, 2020.

Mr. Foley was born on January 27, 1933 to the late Thomas E. and Margaret M. (Kozak) Foley. He had graduated from Lincoln High School with the class of 1951, where he excelled in both football (where he was a half-back with Carl “Rizzo” Mantz) and baseball where he was a pitcher and was scouted several times by the pros. Bob enlisted with the U.S. Navy on  September 23, 1952 and served during the Korean crisis until his discharge on September 19, 1956. He was stationed out of the port of Brooklyn, NY and patrolled the Atlantic Ocean including the Caribbean Islands and Havana Cuba on the USS Heylinger (Destroyer Escort DE 510) with the rank of Boatswain’s Mate 2nd Class, and was a Gunner’s Mate on the 20mm machine guns. In 1956 his ship was a recue ship for the Italian cruise liner SS Andrea Doria which sunk off the coast of Nantucket after colliding with the MS Stockholm.

He was a member of the 1950’s Ellwood Fast Pitch League and later Softball playing with teams such as Freeman Buick and Tommy’s Ashland. Later he coached his son in the Ellwood City Baseball League with Local 1220 (Pony) and the Astros (Colt) through the late 60’s and early 70’s.In the late 70’s he coached the men’s SOI softball team to the state finals.  He was a  huge Pittsburgh sports fan but loved the Pitt Panthers Football team, whch was not an easy thing to do when his four brothers were Notre Dame fans.

Bob grew up in the West End section of Ellwood City and was proud to be from there as with most “West Enders” he had numerous nicknames over the years; Rapid Robert and Murray Dickson (both high school), later years “I said”. He had worked at Mathews Conveyor, Babcock & Wilcox, Ryman Eng., and retired from the Ellwood City School District as a custodian. He is a member of the Holy Redeemer Parish, the Sons of Italy #608, and served as an officer at the Hungarian Home.  Upon retirement he enjoyed card playing with childhood friends, and adored his grand and great-grandchildren.

He is survived by his wife Phyllis (Flinchbaugh) Foley , they would have celebrated their 65th anniversary on June 18th, they met at the West End playground where he was the instructor and she was visiting relatives.  He is also survived by his son, Keith and his wife Rosina (Rocco) of Wayne Twp., his grandchildren, Patrick (Lauren) of Moon Twp. and their children; Isabella, Olivia, and Bennett, Casey (Mathew) Lawrence of North Sewickley Twp. and their children; Dominic and Gionni, and his sister, Joanne Tritt of Katy, TX.

He was preceded in death by his parents, his sisters, Mary Bukac, Alice Chiaro, and Donna “Dodo” Main, and his brothers, Jim, Bud, Joe and Ray Foley.

Visitation will be held on Friday from 6-8pm at the Samuel Teolis Funeral Home and Crematory Inc.. A private Blessing Service will be held for the immediate family on Saturday with Deacon Don Pepe officiating. Interment will follow at the Holy Redeemer Cemetery. Those attending the visitation and service are asked to wear a mask and practice social distancing.