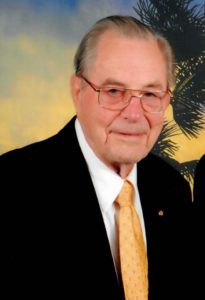 Mr. Mohrbacher was born on December 15, 1926 in Marion Twp. to the late Frederick and Anna Borman Mohrbacher.  He is a member of the Lincoln High School class of 1944. Robert enlisted with the U.S. Navy on January 3, 1945 and served as an Apprentice Seaman until his discharge on November 22, 1946. He was awarded the World War II Victory Medal and the American Area Campaign Ribbon. Following his service with the Navy, Robert graduated from Dartmouth College in 1948 with a degree in Economics. He worked in the management department for the U.S. Steel Corporation until his retirement in 1984 in Ellwood City PA, Gary IN, Pittsburgh, PA, and McKeesport PA. While living in Ellport, Robert helped start the Ellport Boosters Club which benefited the Wur-Ell-Wayne Little League Baseball organization. He is a past member of the Connoquenessing Country Club, and had served on the Ellwood City Area School District school board for two terms as President.  In his spare time Robert enjoyed fishing.

Robert was preceded in death by his parents, his wife Emma I. Mozes Mohrbacher whom he married on February 26, 1949 and passed away on July 24, 2009, and his brother Joe Mohrbacher.

Family and friends will be received on Friday from 4-8 pm and on Saturday from 11:00 am until the time of the service at Noon in the Samuel Teolis Funeral Home, Inc. and Cremation Services. Interment will follow at the Locust Grove Cemetery.