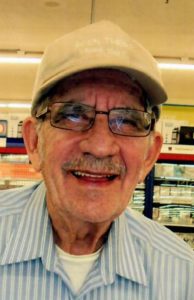 Mr. Sappie was born on January 21, 1927 in Pittsburgh to the late Harry and Teresa (Guger) Sappie. Following high school, Robert enlisted with the U.S. Army on April 27, 1945 and served with the 350th Infantry Regiment as a Heavy Machine Gunner until his discharge on December 15, 1946 with the rank of Private First Class. He was awarded the European African Middle Eastern Campaign Medal, and the World War II Victory Medal. While living in Pittsburgh , Robert worked at North Pole Ice Cream, and Dixon Motor. He then moved to Arizona and worked for Sears, and as a delivery person for a local pharmacy and newspaper. After moving back to Wampum, he worked for Hurley Trucking, the Ellwood Area Family Center, the Lawrence County Head Start program, and McCarter Bus Co.. He is a member of the Faith Fellowship Baptist Church in Ellport, the American Legion, and LIFE Lawrence County where he enjoyed their various activities.

He is survived by his sister, Mary Ann Buzard of Ellwood City, his brother, Regis (Thoris) Sappie of Colorado Springs, CO, his sweet lady friend Pinky whom he enjoyed spending time with, all of his friends at the LIFE Lawrence County Program who loved and cared for him, and many nieces and nephews, all of whom will surely miss him.

He was preceded in death by his parents, and his brother, James Sappie.

The family would like to thank the UPMC Jameson Hospital for their care and concern for Robert.

Family and friends will be received on Thursday from 4:00 pm until the time of the service at 6:00 pm at the Samuel Teolis Funeral Home and Crematory Inc. with Pastor Nathaniel Wilson officiating. Interment will be at the Wurtemburg Cemetery. Members of the Veterans Honor Guard are asked to meet at the funeral home on Thursday by 5:50 pm to conduct full military honors.