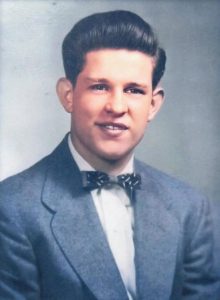 Mr. Robert K. McDowell, a lifelong resident of Ellwood City, passed away on July 30, 2020 at UPMC Jameson in New Castle.

Mr. McDowell was born April 4th, 1935 in Ellwood City to the late Paul A. and Thelma L. (Main) McDowell. He graduated from Lincoln High School with the class of 1954. He then enlisted into the U.S. Army (Active and Reserves) beginning in the late 1950s, serving in the Corps of Engineers, until his discharge in 1964. He often shared stories about his tours on duty while serving in South Korea, at Ft. Lewis in Washington, and in the Army Reserves out of Pittsburgh. Mr. McDowell worked for U.S. Steel from the 1950s through the early 1980s until they closed, he later worked for McDonald Works in Ohio. He dearly loved all things Pittsburgh sports, spending time with (and devoted to) his mother Thelma, working around his house, visiting family through the years in California, Indiana, and Ohio, and taking care of animals, especially his dog, Jacque.

He is survived by his sister, Gaylene Russell of Dayton, Ohio, his nieces, Melody, Pam, Lori, Darcy, and Dawn Starr all of California, Michelle Price of Maryland, and Tammy O’Bryant of Ohio. Nephews, Robert McDowell of Virginia, Larry, Paul, and Brett O’Bryant of Ohio.

He will be greatly missed.

As per Mr. McDowell’s wishes there will be no public visitation or services, inurnment will be at the Locust Grove Cemetery.

The funeral arrangements are entrusted to the Samuel Teolis Funeral Home and Crematory Inc.. Online condolences can be made at Teolisfuneralhome.com.