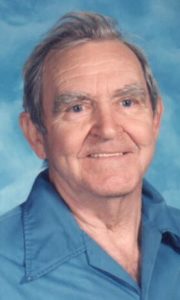 Mr. Robert L. Clark, 92, formerly of Shenango Twp. passed away on Tuesday, July 18, 2017 at the Countryside Nursing Home in Mercer.

Mr. Clark was born on July 6, 1925 in Warriors Mark, Pa to the late Harold F. and Marion F. Maines Clark. He had attended the Warriors Mark High School, and served with the U.S. Navy from October 27, 1943 until February 14, 1946 as a Seaman First Class. He was awarded the Pacific Theater Ribbon with 5 Stars, the American Theater Ribbon, the Victory Medal, and the Philippine Liberation Star. Robert had worked at the Shenango High School as a custodian and bus driver for 10 years, and then at the Ellwood City Forge for 21 years as a machine operator. Following his retirement from the forge, Robert worked for Mr. Robert Barensfield as a caretaker for 7 years. He was a member of the New Castle F & AM Masonic Lodge, and enjoyed hunting the highlight of which was him harvesting a 14 point buck.

He was preceded in death by his parents, his son Thomas Robert Clark in infancy, his sisters, Gertrude Murray and Isabelle Brown,  and his brothers Marvin and George Clark.

As per Robert’s wishes there will not be a public visitation. A private graveside service will be held for the family. Inurnment will be at the Oak Park Cemetery in New Castle. The funeral arrangements are entrusted to the Samuel Teolis Funeral Home, Inc. and Cremation Services.