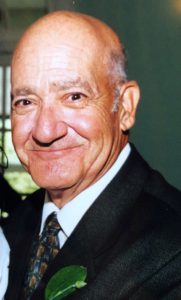 Ronnie was born on November 7, 1935 in Ellwood City, Pennsylvania to the late Joseph and Mary (Demarsh) Thomas. Ronnie was united in marriage to Mrs. Mary Ann (Warsing) Thomas on June 17, 1969. Ronnie was Catholic by faith, attended Northstar Elementary School and was a member of the Lincoln High School Class of 1953.

Ronnie was an Airman in the United States Air Force from 1954-1957, serving as an Aircraft Mechanic while stationed in Germany. He received the national Defense Service Medal, Good Conduct Medal and Army Occupation Medal (Germany).

Upon returning from his service overseas, Ronnie worked a number of places over the years, including J&L Steel. Known as Rocky by his work & golfing buddies, Ronnie worked at Calgon Corporation from 1968 until his retirement in1993.

Ronnie was a passionate supporter of Notre Dame Football and Pittsburgh Pirates Baseball. He also loved coaching his son’s baseball teams in the 1970’s & 1980’s.

Known for his warm smile, good nature and his wonderful sense of humor, Ronnie was a dedicated golfer who was a fixture at DelMar Golf Course for much of his life. He enjoyed woodworking, jigsaw puzzles, and spending time with family. As a resident of Elmcroft in Chippewa during his later years, Ronnie loved outings with his kids, grandkids, nieces & nephews.

Ronnie was preceded in death by his wife, Mary Ann Thomas on February 21st, 2019; his son, Keith Hall on March 22, 2011; his parents; his sisters, Louise Bleakney, Carmeletia (Sis) Russo, and Shirley (Shay) Aubel; and his brothers, Vincent Carozza and Ray Thomas; as well as his beloved dog Beau.

A Blessing Service for Ronnie will be held privately for the family at the Samuel Teolis Funeral Home and Crematory Inc. with Father Mark Thomas officiating. Interment will follow at the Lillyville Church of God Cemetery. Those attending the service are asked to wear a mask and practice social distancing.

Ronnie will be deeply missed by his family and friends. Donations may be made in Ronnie’s name to the Wurtemburg-Perry Volunteer Fire Department and the Holy Redeemer Social Services Food Pantry in Ellwood City.