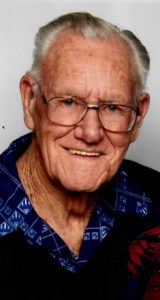 Mr. Welsh was born on March 30, 1926 in Ellwood City to the late Roy and Alice (Adams) Welsh, Sr..  He enlisted with the U.S. Army on September 20, 1945 and served with the Company E 346th Engineer General Service as a Technician fifth grade until his discharge on January 31, 1947. He was awarded the Army of Occupation Medal and the World War II Victory Medal. Following his service with the army, Roy worked at Calgon in the maintenance department for over 30 years. He was a member of the former Knox Presbyterian Church where he served as a deacon and trustee. Roy also volunteered with Meals on Wheels, Circle of Friends in Baden, the Carpenters Project, and in the construction of the Kids Creative Kingdom in Ewing Park. He enjoyed fishing, woodworking, and gardening.

Mr. Welsh is survived by his wife, Nora (Mallary) Welsh whom he married on February 14, 1946, his daughters, Sherry (Gary) Bruno of Industry and Judith (Dell) Noblit of Marion, OH, his grandchildren, Tami DeKorte, Nathan Noblit, and Sean Montrenes, his great-grandchildren, Brandi DeKorte, Madalyn Montrenes, and Zachary Mitchell, and his great-great-grandchild, Nicoletta Mitchell.

He was preceded in death by his parents, his sisters, Doris Morrow and Gladyse Benson, and his brothers, Charles and Gerald Welsh.

Visitation will be held on Thursday from 2-4 and 6-8 pm and on Friday from 10-11 am at the Samuel Teolis Funeral Home, Inc. and Cremation Services. Services for Mr. Welsh will be held on Friday at 11:00 am at the funeral home with Pastor Bill Anzevino officiating. Interment will be at the Locust Grove Cemetery. Members of the Veterans Honor Guard are asked to meet at the funeral home on Friday  by 10:50 am to conduct full military honors.