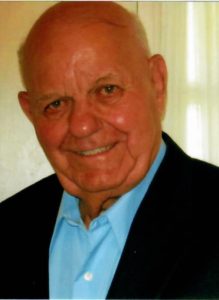 Rudy Vetica, 90, of Ellwood City passed away on Tuesday, November 20, 2018 at the Good Samaritan Hospice.

Mr. Vetica was born on December 25, 1927 to the late Querino and Pasqualina (Condi) Vetica. Rudy is a member of the Lincoln High School class of 1945. After high school he worked for the Ellwood City Post Office for one year. He was drafted then enlisted with the U.S. Army in April of 1946 for 18 months till his discharge in October of 1947. He trained with the tank corp and ran the only Post office in Korea. A sergeant in the army, he was awarded a World War II ribbon and a Victory Medal. He graduated from Duquesne University in 1951 with a B.S. in Business Administration with a major in accounting and a minor in philosophy.

Rudy was then employed by W.W. Winkleman from 1951 to 1952 where he worked on the PA Turnpike in Homewood and the Syracuse New York Airport. He worked for Johnson Bronze Manufacturing in the office from 1952 to 1953. He returned to W.W. Winkleman from 1953 to 1954 to work on the Ohio Turnpike and the Akron Expressway. He worked from 1955 to 1962 as superintendent and estimator for Penn Ohio Road Materials.

In 1962 he became self employed founding Vetica Construction Company. His jobs included the Beaver County Airport taxi way and the Grove City Airport. He also built various secondary roads in Beaver, Lawrence, Butler, Mercer, Jefferson, Indiana and Armstrong counties for the state.While building roads, he founded Vetica Coal Company in 1973. He stripped coal from 1972 to 1975 in Timblin, PA and from 1976 to 1981 in Fombell. In 1982 he founded Vetica Sand Company which produced silica sand for Medusa Cement Company in Wampum. In 1985 he and his sons, Jim and Dave founded Ellwood Processing which galvanized flux for the steel plants. In 2002 his family purchased the Beaver Valley Country Club.

Rudy was a member of the Holy Redeemer Parish. He loved to work and be a part of something and most especially with his family. He was a strong committed family man his entire life and loved every minute he spent with his grandchildren. He enjoyed golfing, and was an avid Notre Dame sports fan. He was known to his family for his fighting spirit and optimism.

Rudy is survived by his beloved wife, Phyllis Galati Vetica whom he was married for 62 beautiful years. His sons David (Shari) Vetica of Patterson Heights, Beaver Falls and Jim (Andrea) Vetica of Ellwood City and his daughters Patty Vetica of Ellwood City and Sharon (Tim) Marsh of Imperial. He is also survived by 5 grandchildren Jared, Justin and Jenna Vetica and Kyle and Michael Broderick. He is also survived by his brother Ray Vetica, and many nieces, nephews, and cousins.

He was preceded in death by his sisters Angelina Yanniello and Dorothy White and 3 brothers Alexander, Joseph, and John Vetica.

Visitation will be held on Friday from 2-7 pm at the Samuel Teolis Funeral Home, Inc. and Cremation Services. A mass of Christian burial will be held on Saturday at 10:00 am at the Holy Redeemer Church with Father Mark Thomas officiating. Entombment will be at the Holy Redeemer Cemetery, St. Peters Mausoleum. Members of the Veterans Honor guard are asked to meet at the cemetery on Saturday by 10:50 am to conduct full military honors.

Memorial contributions can be made to the Holy Redeemer Social Services or St. Jude Research Hospital for Children.