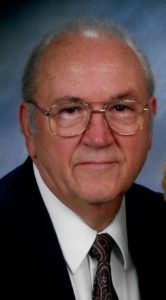 Mr. Hazen was born on August 10, 1938 in Ellwood City to the late Russell E. Hazen Sr. and Caroline (Wiley) Hazen. He had graduated from Lincoln High School with the class of 1956. On December 18, 1956 he enlisted with the U.S. Air Force and served in Guam as a radar operator until his discharge on August 9, 1958. Following his service with the Air Force, he worked at the Babcock & Wilcox Steel Mill in Koppel as an electrical supervisor having retired in 1985 with 30 years of service. Russell also was the owner/operator of Gramma’s House antique store which was located on 6th street in Ellwood City for 10 years. He is a member of the Calvin Presbyterian Church and served as a Deacon and Elder at the church. He enjoyed hunting, fishing, golfing, and most of all spending time with his great-grandchildren.

He is survived by his wife of 61 years, Karen A. (Amalong) Hazen whom he married on August 11, 1958, his daughter, Sheri L. (William) Streitman of Center Twp., his grandchildren, Elizabeth (Peter) Grossman and Kyleigh M. (Matthew) Hiles, his great-grandchildren, Andrew Grossman, Natalie Grossman, Shawn Hiles, Christian Hiles, and Alyssa Hiles, his sister, Patricia (Conrad) Claycomb of Butler, and his brothers, Donald Hazen and Gary Hazen both of Florida.

He was preceded in death by,  his daughter, Lisa Ann McQuiston in 2009, his son, David Shawn Hazen in 1994, and his great-grandson, Michael James McQuiston.

Visitation will be held on Friday from 4-8 pm at the Samuel Teolis Funeral Home and Crematory Inc. and on Saturday from 10:00 am until the time of the service at 11:00 am at the Calvin Presbyterian Church with his Pastor Sean Brubaker assisted by Rev. Keith Black chaplain of Vitas Health Care officiating. Interment will be at the Locust Grove Cemetery. Members of the Veterans Honor Guard are asked to meet at the church on Saturday by 10:50 am to conduct full military honors.

Mr. Hazen’s family would like to thank the Vitas Hospice staff for the compassionate care they extended to him.

Memorial contributions in Mr. Hazen’s name may be made to the Juvenile Diabetes Foundation, Calvin Presbyterian Church Memorial Fund, or to the donors favorite charity.