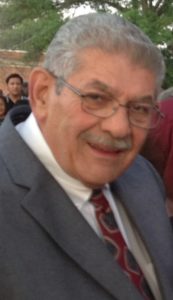 Mr. Samuel A. Battaglia, 76, of Ellwood City passed away on Tuesday, March 5, 2019 at the Allegheny General Hospital.

Mr. Battaglia was born on December 10, 1942 in Ellwood City to Joseph A. Battaglia, Sr. and Mary (Mangelli) Battaglia. Sam had graduated from Lincoln High School and attended Gannon University. He started out working as a claims adjuster for the Pennsylvania Manufacturing Insurance Company and later at Pittsburgh Tube in Monaca. Mr. Battaglia was elected District Justice in 1980 and served for 24 years until his retirement in 2005. He is a member of the Holy Redeemer Parish, the Sons of Italy Lodge #608, The Ellwood City Saxons Club, Lions Club, and the IMBS Club in Koppel. Sam was a coach for the Ellwood City Youth Baseball Association for 25 years, and was the owner and operator of the Dairy Queen which was located in Ewing Park. He enjoyed golfing, playing pool, and was a multiple time Bocce champion in Koppel and other local Bocce tournaments.

He was preceded in death by his father, and his daughter-in-law, Carolyn L. Battaglia.

Visitation will be held on Saturday from 2-4 and 6-8 pm and on Sunday from Noon until the time of the Blessing Service at 1:00 pm at the Samuel Teolis Funeral Home Inc. and Cremation Services. Father Mark Thomas will officiate. Interment will be at the Holy Redeemer Cemetery.