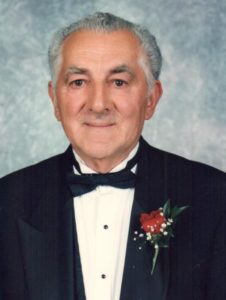 Mr. Samuel J. Santillo, 94, of Ellwood City passed away on Sunday, August 6,2017  under the care of Good Samaritan Hospice at the Heritage Valley Medical Center, in Beaver, Pa.

Samuel was born on July 12, 1923 in Ellwood City to the late Antonio and Catherine Carofino Santillo. Sam attended Lincoln High School in Ellwood City, Pa. As a child Sam worked as a golf Caddie at the Connoquenessing Country Club and played ice hockey on the frozen ponds and rivers of the local area.

As a young man, Sam joined the Civilian Conservation Corps (CCC) which took him to Washington State. Sam was assigned to remote Lumber Camps in the Entiat Valley and outside of Chelan, Washington where he assisted with the cutting of timber to create roads through the wilderness. Sam was one of the two men selected and assigned to an even more remote camp where Sam was responsible for climbing trees utilizing boot spikes and a waist harness to string and maintain telephone communication lines from the base camp all the way up the mountainside to the fire lookout tower on the top.

Following his tour in the CCC. Sam Volunteered for the U.S. Forest Service and was stationed in Idaho. Sam was again stationed at remote logging camps outside of Grangeville, Idaho, where he re-supplied the U.S. Forest service fire lookout towers by ferrying supplies up the mountains to the fire towers by pack horse and also on foot. The supplies would be carried by pack horse until the slope became too steep, and the snow too deep for the horses. After that, Sam packed the supplies on his back and snow shoed the supplies the rest of the way up the mountain to the fire tower on the mountain top where he would then spend the night and walk down to the pack horses the next day. It was during this time that Sam fell in love with the mountains and vistas of the American west.

Later Sam enlisted with the U.S. Navy where he went through basic training at the U.S. Naval Training Center in Samson, New York.

Sam was a tremendous ice hockey player as a young man and even tried out for the Pittsburgh Hornets professional Ice Hockey Team. A professional ice hockey career was a possibility, but would have taken Sam away from family and he decided against it for that reason.

Samuel met the love of his life, Dorothy Komorowski at a Ballroom Dance in Westview, Pa. Sam and Dorothy enjoyed ballroom dancing to the greatest of the Big Bands. Some of their favorites were: Glenn Miller, Tommy Dorsey, Harry James, Benny Goodman, Frank Sinatra and Guy Lombardo and his Royal Canadians.

Sam married Dorothy and they settled in Ellwood City. Sam was married to his beloved wife Dorothy for 54 years until she preceded him in death in March of 2013. Sam and Dorothy had one son, Keith  (Diane) Santillo who reside in Fredricksburg, Virginia.

Sam was a member of the Blessed Virgin Mary and Holy Redeemer Parish in Ellwood City, Sam volunteered and helped  set up, and take down, the annual Holy Redeemer Bazaar for many years.

Sam worked for U.S. Steel in Ellwood City, where he worked as a painter, roofer, and ambulance driver.  He later worked at D’Addio’s Nursery along side his best friend Ken Boffo. His passions in life were firearms & hunting, ballroom dancing, gardening and playing ice hockey.

Sam’s greatest outdoor love was hunting. Sam was an incredible hunter and hunted all over North America, including Canada. Sam hunted all over Pennsylvania, Maine and the American west in Wyoming and Montana. Sam and his eldest brother Wally hunted small game, deer, and bear in Pa. Sam and Wally loved going up to “the big woods” of Pa for deer season. They hunted in Emporium, and at the “straights” of Johnsonburg, in Marienville, Lolita, Ridgeway, and St. Mary’s, Pa. Sam took several Whitetail Deer trophies which qualified him for membership in the Big Bucks Club of Pennsylvania and Maine. Sam and Wally traveled to Encampment, Wyoming every fall for many years to hunt Mule Deer and Pronghorn Antelope.

Sam also traveled to the wilds of British Columbia and Alberta, Canada on two separate 30 day Rocky Mountain Bighorn Sheep big game hunting trips. On his first trip, Sam caught a Greyhound bus in Pittsburgh and traveled alone non-stop to Cache Creek, British Columbia, Canada where the outfitters rigged pack horses. Sam and the guide then traveled by horseback many miles deep into the wilderness where they camped in sleeping bags and tents for 30 days. On this big game hunt Sam took trophy heads of Rocky Mountain Bighorn Sheep, Elk, Mule Deer and Black Bear.

On the second 30 day hunt, Sam once again traveled alone by Greyhound bus from Pittsburgh to Alberta, Canada. On this hunt, Sam hunted with an Indian Guide and took trophies of Rocky Mountain Bighorn Sheep, Mule Deer, Royal Bull Elk and Black Bear. Most notably, Sam made the most spectacular shot of his life on the Elk during this hunt. The trophy Royal Bull Elk was separated from the herd by the younger bulls and climbed into the high country for safety. Sam spotted the Elk late in the day with the light fading quickly, several hundred yards away up on a mountainside in a high gusting wind. It was too late in the day for a stalk to get closer and cut the distance and the Elk would be gone if he waited until the next day. Sam decided to take the shot despite the failing light and high wind conditions. Sam began firing with his Model 70 .270 Winchester and adjusted for elevation and windage on each shot. The distance was so great that the elk was not even spooked by the shots. After 20 shots, Sam sent the guide back to the pack horse for more ammunition. On the 21st shot Sam connected with a perfect heart shot on the elk. The Royal Bull Elk was a true trophy and would easily have qualified for the Boone & Crockett Club record books. The Elk’s antlers were not officially measured. Sam also taught Keith to fish and made a tradition of traveling up to Pigeon Lake in the Kawartha Lakes region of Ontario every October to fish for Musky and Walleye.

Sam was a prolific gardener and was well known for having one of the best gardens in Ellwood City. he grew tomatoes, peppers, beans, swisschard, lettuce, endive, zucchini, corn, carrots, onions, garlic, cabbage and beautiful roses and grapes which he shared with his many family members and friends. Sam also loved to grow and pick grapes and make home made wine.

Sam was preceded in death by his parents, his wife Dorothy, his sister Concetta “Mae” Pace, and his brothers, Valerio “Wally”, Louis, Joseph, Orlando, Fred, Sam, and Michael Santillo.

Visitation will be held on Wednesday from 2-4 and 6-8 pm in the Samuel Teolis Funeral Home, Inc. and Cremation Services.

A mass of Christian burial will be held on Thursday at 10:00 am in the Holy Redeemer Church with Father Mark Thomas officiating. Entombment will follow at the Slippery Rock Cemetery Mausoleum. Those attending the funeral mass are asked to meet at the funeral home by 9:20 am.  Members of the Veterans Honor Guard are asked to meet at the cemetery on Thursday by 11:00 am to conduct full military honors.