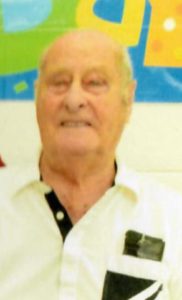 Mr. Heaton was born on September 18, 1925 in the Plain Grove area to the late Bartholomew E, and Minnie L. (Smith) Heaton. He served with the U.S. Navy during World War II as a communications and radar specialist with the rank of Seaman First Class. Following his service with the Navy, Sam worked as a certified auto mechanic in Chicago, and later at Armstrong World Industries in Beaver Falls. He is a member of the VFW Post 8106 in New Galilee and the Koppel Big Beaver Sportsman’s Club. An outdoors man, he enjoyed hunting, fishing, playing horseshoes and bowling. Sam was a man of old fashion values and had a great love for his family.

He was preceded in death by his parents, his wife of 72 years, Mary R. Heaton whom he married on May 22, 1946 and passed away on August 3, 2018, his grandson Jeff Heaton, his granddaughter, Sarah Lynn Heaton, his sisters, Pauline Heaton, Virginia Porter,and Eunice Allen, and his brothers, Bartholomew E. Heaton, Jr., Robert Heaton, Lepidodenderon Heaton, Chester Heaton, and Wayne Heaton.

As per Sam’s wishes there will not be a public visitation. A private graveside service will take place at the Grandview Cemetery with the Veterans Honor Guard providing military honors. The funeral arrangements are entrusted to the Samuel Teolis Funeral Home, Inc. and Cremation Services.