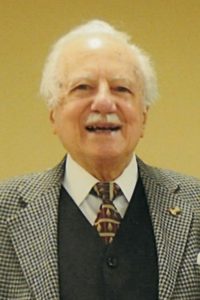 A true Ellwoodian and American Patriot, Mr. Samuel Teolis, 95, of Ellwood City passed away peacefully on Thursday, November 25th, 2021 at the Northview Estates surrounded by his family.

Mr. Teolis was born on a farm in Shenango Twp. on September 25th, 1926 to the late Domenic and Flora (Innocent) Teolis. He is a graduate of Lincoln High School with the class of 1944.  Sam enlisted with the U.S., Army on November 20th, 1944 and served with the 101st Infantry Replacement Company in the 3rd Army and received a bronze star for the battle of Central Europe. He then reenlisted with the Army for an extra year in November of 1945 and was transferred to the Asiatic-Pacific Theatre and served in the Occupation of Korea until his discharge in December of 1946 with the 7th Infantry Division.

In 1948 Sam became a licensed barber and owned and operated a barber shop in Wampum from 1954 to 1955. He also worked part time in various barber shops in Ellport and Ellwood City for over 30 years. He graduated in 1950 from the Pittsburgh Institute of Mortuary Science. In 1956, after working at funeral homes in New Castle and Ellwood City he founded the Samuel Teolis Funeral Home and Crematory Inc.. Sam was also appointed as a Deputy Coroner for Lawrence County in 1956 and served in that position until 1970 and again from 1983 until retiring from the office in 2006.

Samuel was elected to the Ellwood City School Board in 1957 and served until 1963. He was instrumental in the building of the Lincoln High School Cafeteria and giving all school employees funeral leave. In 1960 he was one of the founders of the local Red Cross Blood Bank and was a 12 gallon donor. In 1965, Sam was elected Mayor of Ellwood City and served in that position until 1970. During his time in office as mayor, he was instrumental in the founding of the Orthodox Monastery of the Transfiguration. In 1969 he was awarded the Outstanding Citizen Award from the Ellwood City Chamber of Commerce. He also designed and raised funds for all the monuments of the war dead in Legion Park and other memorials in Ellwood City.

In 2012 he was awarded the U.S. Army Chief of Chaplains Medal of Excellence for his years of service to Veterans and their families. On April 19th, 2015 he was awarded the Blessed John of Vercelli Award by the Beaver County Holy Name Society.

Sam will be remembered by many for leading the Cake Walk at their wedding along with his wife Anita.

He was preceded in death by his parents, his wife, Anita J. (Puncsak) whom he married on January 18, 1958 and passed away on October, 20, 2010, his sisters, Anna D’Amico and Jennie Lonnett, and his brothers, Father Anthony Teolis, James Teolis, Fred Teolis, Andy Teolis, and Sidney Teolis.

Memorial contributions in Mr. Teolis’s name may be made to the Holy Redeemer Angel Fund, Ellwood City Library, Ellwood City Wolve’s Club Scholarship Fund, or The Orthodox Monastery of the Transfiguration.

The Teolis Family would like to extend a special thank you to everyone at Home Instead, Good Samaritan Hospice especially Brittany, and all of the staff at Northview Estates for the wonderful  care they provided.