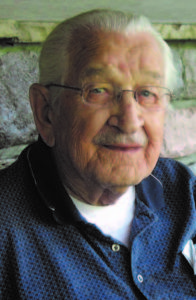 Stanley E. “Stush” Sutkowski, 89, of Ellwood City, passed away peacefully at his home on Sunday, November 18, surrounded by his family.

Stush was born on November 3, 1929 in Ellwood City to the late Stanislaw and Caroline Pogozelec Sutkowski. He was married for 64 years to the love of his life, Mary Ann Varga, with whom he had 5 children. He graduated from Lincoln High School in 1948. Stan was a Corporal in the United States Army and was stationed in the Alaskan Territory from 1948-1951. Following his service with the army, he worked at Aetna Standard and then Herr-Voss, retiring in 1991 as Director of Purchasing. He was a member of Holy Redeemer Parish, and a member of the North Sewickly Township VFD.

Stush was an avid outdoorsman who made sure to share with his grandsons his passion for fishing. When he wasn’t fishing, you could find him hunting, berry-picking, searching for morels with his brother Remus and metal detecting for lost treasures. He also enjoyed coin collecting and spending time with his family at their camp on the river.

Mr. Sutkowski is survived by his wife Mary Ann, his daughters Mary Kay (Dana) Cary of Beaver Falls, Connie (Dave) McGee of Cranberry, Patti Sutkowski of Wampum, and Karen (Jeff) Grassell of Zelienople, and his son Dan Sutkowski of Ellwood City; his 7 grandchildren, Dan and Samantha Cary, Matthew, Tyler, and Scott McGee, and Ben and Veronica Grassell, He is also survived by his sister Leona Wolfe, his brother Robert Sutkowski and sisters-in-law Barbara (Robert) Sutkowski and Eleanor (Ray) Sutkowski,  and Judy (Ernest) Varga.