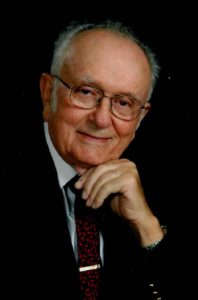 Mr. Stephan Manz, 92, of Ellwood City passed away on Thursday, October 29, 2020 at the Corner View Nursing and Rehabilitation Center.

Mr. Manz was born in Atatin, Yugoslavia on April 14, 1928 to the late Stephan and Theresia (Tordy) Manz. He had served in the Yugoslavian Army and as a Deputy Commander with his local fire department.  He worked as a machine builder and designer at his own machine shop in Yugoslavia. After moving to the United States in late 1957 Stephan worked as a machinist at the Tube Mill, Universal Valve, Babcock & Wilcox Steel Mill in Beaver Falls, and lastly for Portersville Valve. He was a member of the Holy Redeemer Parish, and the Apollo Singing Society in Sharon, PA for 30 years. An outdoorsman, Stephan enjoyed hunting, fishing, stamp collecting, and reading.

He is survived by his beloved wife of 70 years Theresia (Miller) Manz whom he married on August 12, 1950, his son and daughter-in-law, Stefan and Darla Manz of Allison Park, his grandson, Austin Manz (Carly O’Brien), step grandson, James White, and his great-grandchildren, John , Alli, Kaylee, Loren, Nicholas, Jacob, and Rachel.

He was preceded in death by his parents, his daughter, Maria Manz in infancy, and his brother, Tony Manz.

Visitation will be held on Monday from 2-4 and 6-8 pm at the Samuel Teolis Funeral Home and Crematory Inc.. A mass of Christian burial will be held on Tuesday at 10:00 am at the Holy Redeemer Church with Father Philip Farrell officiating. Interment will follow at the Holy Redeemer Cemetery. Those attending the funeral mass are asked to meet at the funeral home by 9:20 am.

Memorial contributions in Mr. Manz’s name may be made to the Holy Redeemer Angel Fund.