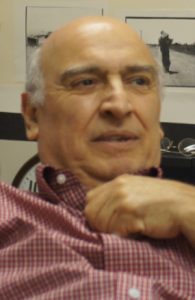 Sal Hanna, Chippewa Township, passed away on September 13, 2019 at the age of 75, surrounded by his loving family.

Dr. Hanna taught English in “small but extraordinary,” to use his words, liberal-arts colleges for forty-one years.

While teaching, he published two creative nonfiction books under, what he playfully called, “my flagship name: S S Hanna.”

The University Press of Colorado published (1996) his second book titled Beyond Winning, a sports memoir. Both books are in hardback, and both sold out and are out of print.

In retirement while in his seventies, he tried to create people and places with words by writing two interrelated serio-comic novels. Both novels are published in paperback (and electronically), and both are in print.

His third book is a novel published (2015) by the Texas Review Press, a member of the Texas A&M University Press Consortium. Titled A Hall of Fame for Unknown Writers, the novel uses the pen name: S. P. Areham.

His fourth book is published (2019) by Pelekinesis, a literary house in Claremont, California. The novel is titled: A Hairpiece Named Denial. It deals with the ways of a wealthy widow who is an engaging writer of comic prose and a small-town philanthropist.

In her last act, she establishes in her hometown in Kansas the country’s first hall of fame for unknown writers. (The origin and contents of the hall are explored in the book by Areham.)

As an expression of his love for his family members, Dr. Hanna dedicated his four books to them. The first book is to his wife of forty-four years: Mahera. Her name spelled backwards forms his pen name.

The second book is dedicated to their daughter Rita. The third to their son Sal and his wife Melissa. The fourth to their twin boys: Paul and Sami, and to their wives: Tracy and Katie.

The fourth book is also dedicated to their son-in-law, Todd, and once again to Mahera: “for her wisdom, humor & love.”

He loved his seven grandchildren: Tressa and Sarai; Elise and Kai; Aiden, Addison, and Alivia. He also loved his two sisters Ursula and Agnes (who live in Wisconsin) and their families. And he loved his extended family members, too numerous to list by name.

The Jacob Hattar family of Tinley Park, Illinois, close relatives with whom the Hannas had exchanged many visits and were traveling companions to Europe and Hawaii, deserve a special mention for their friendship and love.

At his request, there will be no viewing of the body and no memorial service. A private Christian service for the family will be held at Saint Elias Orthodox Church in Ellwood City, followed by burial in Locust Grove Cemetery. He wrote the words that appear on his gravestone:

He loved the Bread of Life

and always prayed for peace

while studying the first half

of the twentieth century.

“In this period,” he states in

the last line of his last novel

“literature flowered in the

In Lieu of flowers, donations can be sent to: