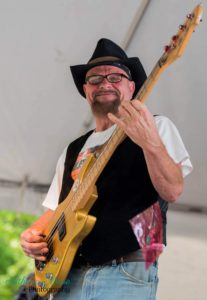 Terry L. Lowers, 61, of Fombell passed away on Sunday, August 2, 2020 at the UPMC Shadyside Hospital.

Terry was born on September 27, 1958 in Ellwood City to the late Gordon and Shirley (Wright) Lowers. He had attended Riverside High School. Terry had worked for many years for Bill Croup Electric and Wright Meat Packing. He was also a member of the Lillyville Church of God and the church’s Praise Band. A talented musician, Terry played bass and sang for the Ameretta Band for over 30 years. He was a member of the MOOSE #93, Hungarian Home, Sons of Italy #608, and the Eagles Club, and was a Harley Davidson motorcycle enthusiast.

Family and friends will be received on Friday from 3:00 pm until the time of the memorial service at 7:00 pm at the Lillyville Church of God pavilion with Pastor Dennis Arndt officiating. Those attending the service are asked to practice social distancing and wear a face mask.