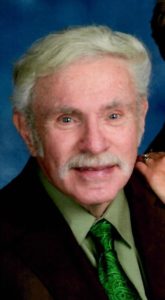 Mr. Terry R. Smith, 77, of North Sewickley Twp. went home to be with his Lord and Savior Jesus Christ on Wednesday, April 4, 2018 at his home with his loving family around him.

Mr. Smith was born on January 14, 1941 in North Sewickley Twp. to the late Clare and Helen “Bunny” (McKeough) Smith. He had graduated from Lincoln High School with the class of 1959. Following high School, Terry served with the U.S. Army during the Vietnam War, and the Army Reserves. He had worked at the Babcock & Wilcox Steel Mill, the Connoquenessing Country Club, and Koppel Steel. Terry is a member of the North Sewickley Presbyterian Church where he served as a Deacon. He also had attended the New Brighton Christian Assembly for 10 years. Terry loved to go to Tionesta, hunting, riding motorcycles, and taking Care of his horses and poodles for 30 years.

Mr. Smith is survived by his wife of 52 years, Carol (Holfelder) Smith, his daughters, Melissa (Edward) McFarland of Ellwood City and Melanie (Scott) Emler of New Brighton, his son, Terry R. Smith, Jr. of Tionesta, Pa., his grandchildren, Nikki McFarland (Nate Magill), Olivia McFarland, and Brielle Emler, and his great grandchildren, Madison Montero, Fae Lynne Kosto, Jamison Magill, and Rayla McFarland. He is also survived by his sister, Marge (John) Petrello of Arizona, his brother, Roger Smith of Clearwater, FL, his brother-in-law, Don Holfelder, and his sister-in-law, Linda Holfelder, along with many nieces, nephews, and cousins.

He was preceded in death by his parents, his sister-in-law, Ernie Ann Holfelder, and his brother-in-law, Rev. Harry Holfelder.

Mr. Smith’s family would like to thank the VNA nurses, Dee, Holly, and others for the compassionate care that they extended to him.

Visitation will be held on Friday from 1-3 and 6-8 pm at the Samuel Teolis Funeral Home, Inc. and Cremation Services, and on Saturday from 10:00 am until the time of the service at 11:00 am at the North Sewickley Presbyterian Church with Pastor Nathan Loudon and Pastor Sam DeMarco officiating.  Interment will follow at the Holy Redeemer Cemetery. Members of the Veterans Honor Guard are asked to meet at the cemetery on Saturday by Noon to conduct full military honors.

Memorial donations in Terry’s name may be made to the North Sewickley Presbyterian Church, or to the VNA Hospice Care, Butler, Pa.