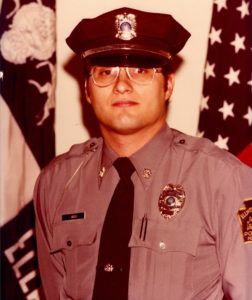 Tom was born on December 8, 1953 to the late Jimmie and Anna Marie (Fester) Bucci, Sr.. He is a member of the Lincoln High School class of 1972. Tom enlisted with the U.S. Air Force on April 22, 1975 and served as a radio repairman at the Minot Air Force Base in North Dakota until his discharge on November 10, 1976. He then graduated from the Police Academy in 1978. On December 1, 1978 he was hired by the Borough of Ellwood City as a police officer. He retired from the Borough on May 1, 2000 with the rank of Police Sergeant. Tom later worked as a contractor under the name of Bucci and Son’s Construction. He is a member of the Fraternal Order of Police and a past member of the Ellwood City Masonic Lodge.

He is survived by his wife, Rhonda (Booher) Bucci whom he married on September 6, 2003, his sons, Jimmie (Karrie Fazenbaker) Bucci of Wampum and Johnathan Bucci of Pittsburgh, his step children, Michael (Sharlee) Zurrica, Paul Zurrica, Rev. Kevin Zurrica, and Tim Zurrica, his grandchildren, Annamarie and Damon, five step-grandchildren, his sister, Joanna Bucci of Lower Burrell, and his brother, Jimmie (Tomoka) Bucci, Jr. of San Diego, CA.