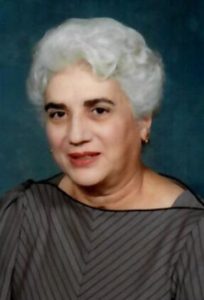 Velia Giovannini, 95, of Ellwood City, passed away on Tuesday, September 10, 2019. She was born in Ellwood City on December 19, 1923 to the late Filippo and Irene (Peuto) Giovannini. She enjoyed a long career in cosmetology, and was a well-known beautician at her Vel’s Salon in Ellwood City for more than 30 years.

Before beginning her career in cosmetology, she worked at the Ellwood City Glass Company for 10 years. She graduated from the Maison Felix School in Pittsburgh in 1959, then continued her training at the Arnold Zegarelli School of Design, graduating in 1963. She then worked at the Strouss-Hirshberg Beauty Salon in New Castle before starting her own business, Vel’s Salon, in her home. She retired in 1991.

She was a devout Catholic and a member of Holy Redeemer parish. She loved to travel and visited Europe several times where she became acquainted with her relatives in the Italian Alps, and many in Rome, Italy.

She was preceded in death by her parents, her brother, Joseph P. Giovannini, and her sister, Gloria Giovannini.

Visitation will be held on  Sunday, September 15, 2019, from 3 to 6 p.m. at the Samuel Teolis Funeral Home and Crematory Inc., 309 Spring Ave., Ellwood City. A Mass of Christian Burial will be held at  10:00 am on Monday, September 16, 2019, at Holy Redeemer Catholic Church with Father Mark Thomas officiating. Interment will follow at the Locust Grove Cemetery.

Velia’s family expresses its sincere appreciation to the many compassionate individuals who assisted Velia in her final years, with special gratitude to Ms. Theresa Goe, and to the staff of Good Samaritan Hospice at the Heritage Valley Hospital in Beaver.