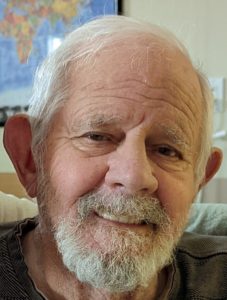 Bob was born in Sacramento, California on September 28th, 1931, to Ernest Aaron Wiebe and Agatha (Peters) Wiebe. He graduated from Stockton College in Stockton California in 1950. Soon after graduation, Bob took his first job as a mechanic at the Hanford Milk Company and a little more than a year later, enlisted in the United States Navy on his 20th birthday. Four years later, Bob was honorably discharged from the Navy at the U.S. Naval Amphibious Base Coronado California. It was during his tour of duty in San Diego that Bob met and married his life-long wife, Joyce Ann Housley. Vernon and Joyce were married on February 18th, 1955, in Yuma Arizona. After his discharge from the Navy, Bob began work for Hughes Aircraft in San Diego and several years later, he joined Lockheed as a flight line mechanic supporting the U.S. Air Force’s SR-71 (Blackbird) flight operations in Southern California. Later he was transferred into Lockheed’s Skunk Works where he joined the U.S. government’s ultra-secret development program to produce stealth technology aircraft for the U.S. Air Force. Bob remained in Skunk Works until his retirement from Lockheed, first, supporting classified programs to guide the F-117A Nighthawk Stealth Fighter to an initial operating capability. His work at both Area-51 and at the Tonopah Test Range with Lockheed included supporting the famous “Baja Scorpions”; the U.S. Air Force’s 4450th Tactical Group responsible for conducting F-117A testing and operations until the last production F-117A was delivered by Lockheed in July 1990. Bob’s service with Skunk Works included operational and logistics support following the Iraqi invasion of Kuwait when the Tonopah base was mobilized to support operation Desert Shield.

Bob was an avid fisherman who loved photography and the Big Band sounds of the 40’s and 50’s. Count Basie’s relaxed, propulsive swing, the clarinets of Benny Goodman and Artie Shaw, Bob Crosby’s Dixieland style, and the band of Tommy Dorsey were some of his favorites.

He was preceded in death by his wife, his parents, his daughter Jacqulyn (Wiebe) Dakramanji in 2009, and his son, Robert Ernest Wiebe in 2016.

Following Bob’s wishes there will not be a public service. Final arrangements are entrusted to the comforting, and very thoughtful and caring family of Samuel Teolis at the Samuel Teolis Funeral Home and Crematory Inc. in Ellwood City.