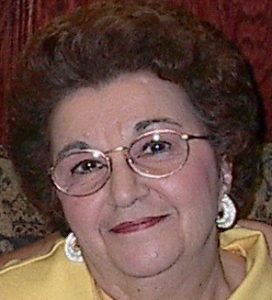 Mrs. Herko was born on September 21, 1933, the daughter of Nick Ierino and Mary Torchio Ierino.

Virginia was a loving wife, mother, and grandmother. A nurturing caregiver, a faithful friend. She enjoyed cooking, especially baking, and was a dedicated, enthusiastic homemaker.

She was a life-long volunteer: a member of the Ellwood City Hospital Auxiliary, Christian Mothers and, later, a docent at Cracker Country, a historical site.

Virginia was an active member of the Holy Redeemer Church most of her life. For a time, she was a member of the St. Vitus Catholic Church in New Castle.

She was preceded in death by her husband, Carl, whom she married on July 2, 1951.

Virginia is survived by two daughters and sons-in-law, Carol A. and Will Mangino of New Castle, Saundra L. and Perry Graciano of Fox Chapel; a son and daughter-in-law, Robert M. and Debbie Herko of Ellwood City; nine grandchildren and eight great-grandchildren. A brother, Nick Ierino, Jr. of New Wilmington, also survives.

In addition to her parents and her husband, she was preceded in death by four brothers, Joseph, Samuel, Dominick, and Frank Ierino; and two sisters, Rose Cross and Louise Badger. She will be interred at the Locust Grove Cemetery.
Local funeral arrangements have been entrusted to the Samuel Teolis Funeral Home, Inc. and Cremation Services.