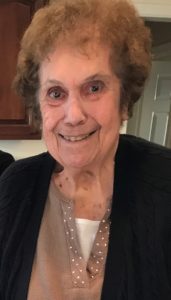 Virginia “Jean” Scott, 95, of Ellwood City passed away on Tuesday, December 3, 2019 at her residence.

Jean was born on March 8, 1924 in Ellwood City to the late Dominic and Virginia (Portugallo) Eonta. For 13 years she was the owner and operator of Jean’s Bakery which was located on South 2nd St. in Ellwood City. She then was an assistant manager at Fishers Big Wheel at the Franklin Plaza until she retired. Jean is also a life long member of the Holy Redeemer Parish. She enjoyed going to Golden Agers, doing crafts, and baking.

She is survived by her daughters, Donna (Paul) Crofton of Ellicott City, MD and Debbie (Larry) Bevivino of Ellwood City, and her granddaughter, Jessica Crofton.

She was preceded in death by her parents, her sister, Dolores Salvatorelli, and her brothers, John, Robert, Anthony, Joseph, Phil, and Paul Eonta.

Visitation will be held on Friday from 10:00 am until the time of the Blessing Service at Noon at the Samuel Teolis Funeral Home and Crematory Inc. with Father Mark Thomas officiating. Interment will follow at the Locust Grove Cemetery.

Memorial contributions in Jean’s name may be made to the Ellwood City Area Public Library.