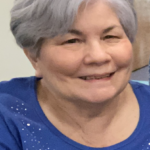 Vivian L. Houk, 74, of Ellport passed away on Monday, October 3rd, 2022 at the UPMC Jameson Hospital in New Castle.

Vivian was born on January 27th, 1948 in Hayward, California the daughter of the late Frank E. and Dorothy (Rodgers) Inman. She had graduated from Laurel High School with the class of 1968. For many years Vivian worked for Fashion Bug as a manager at the Franklin Plaza, Shenango Mall, and the Beaver Valley Mall sites. Most recently she was a well-known cashier at Busy Beaver in the Franklin Plaza. Vivian enjoyed crafting, painting, and spending time with her grandchildren.

She was preceded in death by her parents, first husband Arthur J. DeSalvo, and former husband Ronald A. Houk.

Visitation will be held on Wednesday from 1-3 pm and 5 pm until the time of the service at 7 pm at the Samuel Teolis Funeral Home and Crematory Inc with Pastor Ron Schermerhorn officiating.

Memorial contributions in Vivian’s name may be made to the American Heart Association.