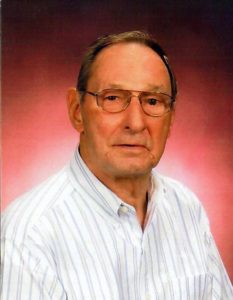 Mr. Walter Freson, 90, of Ellwood City passed away on Wednesday, November 22, 2017 at his residence.

Walt was born in Cincinnati, OH on January 16, 1927 to Frank J. and Jeanne E. Freson. He moved here in 1939 and has lived and worked here since. He was married to the former Betty Jean Smith on June 7, 1948 and together they had two sons Mark David and Joel Allen.

Walt was very proud of his country and served with the U.S. Marines in the Pacific Theater during World War II.

Walt’s greatest love and pride came from his wife and family.

Walt is survived by his wife Betty Jean, his son Joel (Sherry) Freson of Darlington, his daughter-in-law Diane Freson of New Castle, his grand-daughter Erin (Mark) Klueppel of Canal Winchester, OH, his step-grandson Brandon Lloyd of New Galillee, and his step great-grandchildren Maddy, Lennon, Zack , and Gage. He is also survived by his half brother Frank (Joyce) Freson of Princeton, IL, and a half sister Jane Lee Freeson Smith of Cincinnati, OH.

He was preceded in death by his parents, his son Mark David Freson, his step father Kelly M. Shaffer, and his step grandson Richard Lloyd.

Family and friends will be received on Sunday from 2:00 pm until the time of the Memorial Service at 3:00 pm at the Bell Memorial Church with Rev. Ray Madina and Rev. Glenn Hink officiating.  Members of the Veterans Honor Guard are asked to meet at the Bell Memorial Church on Sunday by 2:50 pm to conduct full military honors. Interment will be at the Slippery Rock Cemetery. The funeral arrangements are entrusted to the Samuel Teolis Funeral Home, Inc. and Cremation Services.