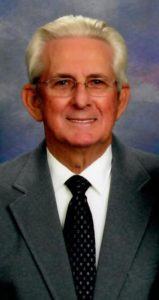 Mr. Hall was born on June 14, 1932 in Franklin Twp. to the late Mike and Tressa (Ritter) Hall. He had graduated from Lincoln High School with the class of 1950 and was an out standing baseball player for the high school team. He then attended Geneva College where he studied Theology. Gary enlisted with the U.S. Army on June 4, 1953 and served until his discharge on July 3, 1954 with the rank of Private E-2. He had worked for Columbia Gas as a supervisor for 32 years, and was the care taker for the Lillyville Church of God Cemetery for over 15 years. He is a life long member of the Lillyville Church of God, and was well known for his singing voice. In his younger years he played softball in the Ellwood City Men’s League and local church leagues. He was an avid fisherman and enjoyed crafting his own fishing lures.

He is survived by his wife, Shelby (Jacobs) Hall whom he married on October 21, 1974, his daughters, Kimberly (William) Hoy of Cochranton, Pa and Sherry Hoak of Transfer, Pa, his son, Darin (Stacey) Hoak of Perry Twp. several grandchildren and great-grandchildren, his sisters, Barbara (John) Boydell and Judith Schwartz both of Ellwood City his brother, Gerald Hall of Raleigh, NC, and his beloved dog, Henry.

He was preceded in death by his parents, his daughter, Missy Hall, his son, Gary Keith Hall, his granddaughter, Megan Wilhelm, and his sister, Alma Egan.

Visitation will be held on Wednesday from 4-7 pm at the Samuel Teolis Funeral Home and Crematory Inc. and on Thursday from 10:00 am until the time of the service at 11:00 am at the Lillyville Church of God with Rev. Dennis Arndt officiating. Interment will follow at the Lillyville Church of God Cemetery. Members of the Veterans Honor Guard are asked to meet at the cemetery on Thursday by 11:40 am to conduct full military honors.

Memorial contributions in Mr. Hall’s name may be made to the Lillyville Church of God.