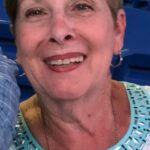 Mrs. Yolanda “Penny” (Paxson) Arkett went to be with her Lord and Savior on Wednesday, October 26th, 2022 after a courageous battle with breast cancer. She was born December 27th, 1948 to the late Joseph Paxson Sr. and Yolanda (DeCaro) Morrison.

She married her beloved husband James Arkett on August 22nd, 1981, who survives. She is also survived by her daughter Amy (Mike) Westcott of Edinburg and son Andrew (Jenny) Arkett of West Mifflin. Loving grandmother to Michael Arkett, David and Abbey Westcott and cherished sister to Joseph “Sonny” Paxson of Mississippi, Michael (Sherry) Paxson of Alabama, and Terri (Chris) Smekal of Florida, and brother-in-law John R. Zias of Perry Twp., and many adored nieces and nephews.

Penny was preceded in death by her parents, sister Carolyn Rizzo and son Kevin Arkett.

Penny is a member of the Lincoln High School class of 1967, and had worked as a cashier at Mario’s Market, Dom’s IGA, and Quad L. She also enjoyed cooking for family and friends.

Penny was known to share her abounding faith and love with everyone she met. She was known to minister words of faith to those in need, known as a “Pillar of Faith” who loved to share Jesus wherever she went. The absence of her sparkling eyes and smiling face will forever leave a void in our hearts. She will be deeply missed.

Visitation will be held on Friday from 3:00 pm until 7:00 pm at which time a closing prayer will be given by Rev. Sam Fidell at the Samuel Teolis Funeral Home and Crematory Inc..

A private service for the family will be held on Saturday at the funeral home officiated by Rev. Sam and Tracy Fidell. Interment will follow at the Locust Grove Cemetery.